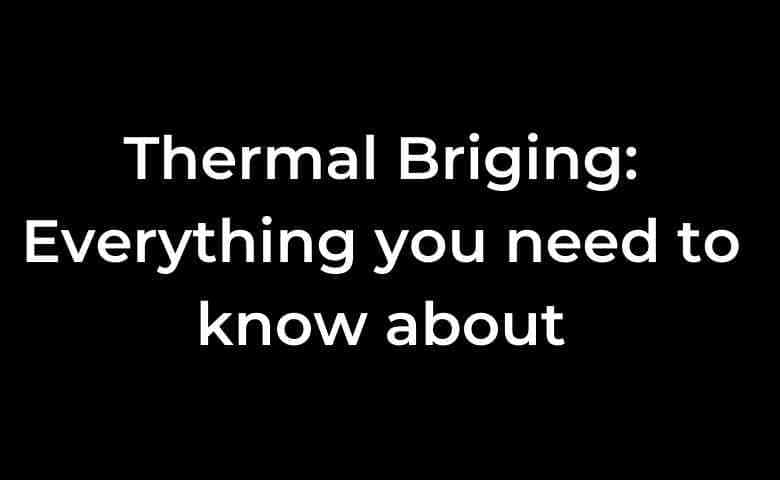 Thermal bridging happens when a tiny portion of a wall, floor, or roof loses much more heat than the rest of the structure. Thermal bridging can happen in any sort of construction. Increased heat loss, occupant discomfort, unforeseen expansion/contraction, condensation, freeze-thaw damage, and related moisture and/or mold problems for materials vulnerable to moisture are all possible repercussions of thermal bridging.

The magnitude of these impacts determines the severity of the thermal bridge. Several solutions for avoiding thermal bridges and the harm they cause can be introduced during the design stage when adjustments can be easily included. Repairing thermal bridges after they’ve been built can be both costly and challenging.

What is Thermal Bridge in the construction industry?

Heat can “short circuit” insulation using a thermal bridge. This usually happens when a high-thermal-conductivity material, such as steel framing or concrete, penetrates or interrupts a layer of low-thermal-conductivity insulation. Thermal bridges can form where building materials are connected, such as exposed concrete floor slabs and beams that abut or penetrate a building’s exterior walls.


The passage of heat across an object that is more conductive than the materials around it is known as thermal bridging. The conductive substance generates a heat route with the least amount of resistance. Thermal bridging in homes and buildings can be a significant cause of energy loss, resulting in higher power bills.

Heat always seeks to go from hot to cold locations. It takes the path of least resistance in doing so. A thermal bridge is a small region of the building envelope where the heat flow is different (typically higher) than in other areas. To put it another way, these thermal bridges serve as heat highway that leads directly to the outside.

As a result, the inner surface temperature near the thermal bridge is lower. If this area becomes too cold, condensation and moisture build-up may occur. Mould may develop over time, posing a risk to the structure of the building. Higher surface temperatures, even near thermal bridges, are often associated with better thermal protection, therefore highly energy-efficient structures are less problematic in this regard.

Thermal bridging in a home

A building’s thermal envelope is a layer of the enclosure system that inhibits heat transfer from the conditioned interior to the unconditioned exterior. Heat will travel at varying speeds through the thermal envelope of a structure depending on the materials utilized. Heat transmission will be stronger when there is no insulation since there is less thermal resistance at thermal bridge zones.

Thermal bridges can form in a variety of places within a building envelope, but they’re most common where two or more building elements intersect. Here are a few examples of commonplaces:

The webs of the block and grouted cores can operate as thermal bridges in a single wythe concrete masonry wall, especially when the concrete masonry units’ cores are insulated. This heat loss, on the other hand, is rarely substantial enough to create moisture condensation on the stone surface or other aesthetic or structural damage. As previously stated, these thermal bridges are taken into account when establishing the overall R-value of the wall.

The thermal bridging effects can be addressed by putting insulation to the outside or interior of the brickwork rather than the cores in severe climates, specific interior situations where condensation may occur under particular conditions, or when otherwise required. Furthermore, heat bridging between webs can be avoided by utilizing a lighter-weight masonry unit, special units with smaller web sizes, or units with fewer cross webs.

Shrinkage cracking in concrete masonry is frequently controlled by horizontal joint reinforcement. According to calculations, the effect of joint reinforcing on the overall R-value of the masonry wall is on the scale of 1–3%, which has little effect on the building’s energy consumption.

Insulation is often installed between the two wythes of masonry in masonry cavity walls. This creates a continuous layer of insulation, reducing the impacts of thermal bridging (note that some references refer to the area between furring or studs as a “cavity,” which is not the same as a masonry cavity wall).

The interior surface of the wall remains at a temperature near to the building’s interior temperature because the wall ties are insulated from the interior. Moisture condensation is unlikely to damage the interior finish material, and occupant comfort is unlikely to be compromised. The kind, size, and spacing of the ties, as with horizontal joint reinforcement in single wythe construction, will determine the potential impact on energy use.

A typical concrete masonry veneer over a steel stud backup in cross-section. In an insulated wall system, steel studs operate as powerful thermal bridges. Steel conducts over 1,000 times more heat than mineral fiber insulation of the same thickness and area. The steel stud allows heat to seep through the insulation, significantly reducing its effectiveness.

Thermal bridging across steel studs, like concrete masonry webs, must be considered. Testing, modified zone calculation method, or insulation/framing layer adjustment factors are all valid ways for determining the R-value of insulated steel studs, according to ASHRAE Standard 90.1.

The R-value of the insulated steel stud section is used to calculate the effective framing/cavity R-value, which accounts for thermal bridging. The designer can account for the higher energy demand due to thermal bridging in these wall assemblies by using these corrected R-values.

Local cold spots can form at the stud positions because the steel studs are often in touch with the inside finish. Moisture condenses in some circumstances, generating dampness along these strips. Dirt and dust collect in wet regions, resulting in darker vertical lines on the interior at steel stud positions.

Moisture is likely to collect on the outer flanges of steel studs if warm, wet indoor air penetrates the wall, increasing the risk of stud and connector corrosion and wall structural damage. Moisture can also harm gypsum sheathing on the outside of the studs, especially during freeze-thaw cycles. A continuous layer of insulation over the steel stud/insulation layer can help to mitigate these effects.

Thermal bridging occurs at the steel beam and where the concrete floor slab enters the internal masonry wythe when the wall system is insulated on the interior, as shown on the left.
Insulation in the cavity, rather than on the interior, is a superior option. This method efficiently separates both the slab edge and the steel beam from the external, minimizing heat flow and condensation potential in these locations while also lowering heating loads.

Installing insulation on the interior of the steel beam is a third option not shown. The thermal loss through the slab edge, however, is not addressed by this technique. Furthermore, the inside insulation lowers the temperature of the steel beam, which can result in condensation unless a tight and continuous vapor retarder is installed.

The Best Flow Meters For Oil And Gas Measurement

A parapet can operate as a thermal fin, wicking heat up through the wall, because it is exposed to the outside environment on both sides. For a masonry parapet, there are two possible insulating options. The slab edge on the left is insulated, but the parapet is not. Between the roof slab and the masonry backup, heat can escape.

A preferable option is to insulate the parapet itself, creating a thermal barrier between the building’s interior and the surrounding environment. This minimizes heating and cooling loads and essentially eliminates the possibility of moisture on the roof slab’s underside.

Although thermal bridging is most commonly associated with conduction heat transfer (heat flow through solid materials), heat and moisture transfer due to air movement can magnify thermal bridging effects, especially when warm, moist air enters the wall. As a result, structures with high internal humidity, such as swimming pools, spas, and cold storage facilities, are especially vulnerable to moisture damage.

Thermal bridge moisture damage can be considerably reduced by properly installing vapor and air retarders. Separate vapor or air retarders are not always required in concrete masonry construction; check local building standards for details. Moisture leakage can cause thermal bridging due to air leakage for two reasons: air will flow through the same locations that enable moisture to enter, and water leakage can cause degradation of air barriers and insulating materials in some circumstances.

There are several techniques that have been proved to reduce thermal bridging depending on the rationale, location, and kind of structure. These solutions aim to either create a thermal break where a building component would ordinarily span from outside to inside or reduce the number of building components that cross from outside to inside. Some of the strategies are as follows:

How to Break the Thermal Bridge?

Thermal bridging must be avoided by covering the studs with continuous insulation. Insulation can readily be added to the wall structure during home building to break the thermal bridge. A layer of insulation can only be installed from the inside or exterior of the home while remodeling. Because it involves a complete rebuild to change drywall, trim, or other interior finishes, adding insulation from the inside is often complex and expensive.

On the outside, new siding is the simplest way to add a layer of continuous insulation to an existing home. Not only would putting insulation behind new siding break the thermal bridge and enhance the energy efficiency, but you will also be able to keep the interior of the property unaffected while getting an external facelift.

Expanded polystyrene (EPS), extruded polystyrene (XPS), and graphite polystyrene are the three types of hard insulation usually used to insulate a home under new siding (GPS). All three alternatives provide varying levels of energy savings and are available in standard sizes, but they differ in terms of other features and benefits.

Installing insulated vinyl siding, which is vinyl siding with a molded foam backer permanently bonded to the panel, is another way to break the thermal bridge. You receive the energy savings of insulation with greatly better durability and aesthetics for the siding panel with this product.

To assist reduce this energy loss, the thermal bridge established by the wood studs in the home must be broken by continuous insulation. When new siding is added, whether it’s flat, rigid sheets of insulation or insulated vinyl siding, it’s one of the most cost-effective times to add a continuous blanket of insulation to an existing home.

4 Essentials to Consider if You Want a Career in Construction

Fiber Reinforced Concrete: A Sustainable Building Material for the Future

Internships vs Apprenticeships: A Comprehensive Guide

What Education Do You Need to be a Construction Worker?

What’s the Difference Between Rigid and Flexible PCB