The consortium consisting of Egis, Baudin-Chateauneuf, Alcor and VINCI Construction subsidiary Sogea-Satom has won a big contract which includes designing and building of a stadium in Côte d’Ivoire’s political and administrative capital, Yamoussoukro. 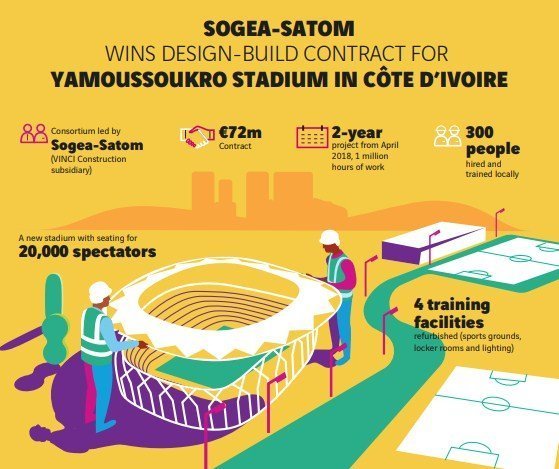 According to a recent press release from VINCI, the €72 million contract includes the construction of the main stadium in Yamoussoukro as well as the refurbishment work for the four training facilities located near the Yamoussoukro city.

The stadium is designed by Designed by architects SCAU and it is expected that it will accommodate an audience of 20,000 during Africa Cup of Nations (CAN) matches. Côte d’Ivoire is going to host these matches in 2021.

According to VINCI, the construction work of the new stadium will be completed by June 2020. Sogea-Satom is planning to hire as well as train over 300 people locally. VINCI’s  has earlier worked in Côte d’Ivoire for multiple projects like the modernisation of Abidjan’s fishing port (2015) and the Songon water treatment plant (2016). Other infrastructure projects that are currently under construction include the urban development of Boulevard de Marseille in Abidjan, construction of a water treatment plant at Saint Viateur and construction of a road between Bouaké and Ferkessédougou.

The SagarMala Project: A Big Opportunity for Construction Professionals

Are you worried about your future in Construction?