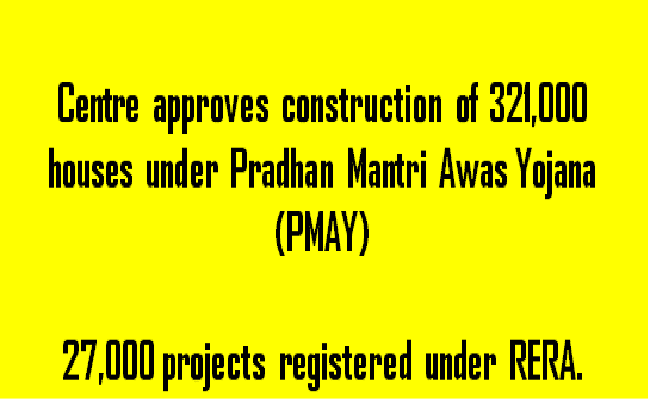 Maharashtra, Gujarat, MP, and Punjab have been best in implementing RERA. Around 27,000 projects across India have been registered under the Real Estate Regulation and Development Act (RERA), according to the data from the Forum for People’s Collective Efforts (FPCE). The FPCE represents home buyers in all cases pertaining to RERA. Maharashtra, Gujarat, MP, and Punjab have performed better in implementing RERA.

The total cost of constructing these units pegged at Rs. 182 bln. The Bharatiya Janata Party (BJP)-led central government has approved the construction of over 321,000 houses for the urban poor under the Pradhan Mantri Awas Yojana (PMAY), taking the total number of houses under the scheme to 4.2 million. As per the official release, Haryana has been sanctioned the highest number of 70,671 houses, followed by West Bengal with 59,929 units, Rajasthan 54,821 units, Uttar Pradesh 39,683 units, Gujarat 35,851 and Mizoram with 15,798 houses. Karnataka, Maharashtra, Madhya Pradesh, Bihar and Kerala each have been sanctioned 5,000-12,000 houses, while Himachal Pradesh, Punjab and Goa have been approved less than 5,000 units each. The total construction cost of these units has been pegged at Rs. 182 billion, of which the Centre will contribute Rs. 47.5 billion.

How to become a solar Engineer [2023 updated Career Guide]