For several days the city of Yekaterinburg in Russia turned into the main site for one of the biggest trade fairs for industrial technology, equipment and services known as INNOPROM. Around 50,000 square meters of exhibition space at INNOPROM were occupied with stands representing over 600 companies from 20 countries, including Belarus, China, Czech Republic, Denmark, Finland, France, Germany, Great Britain, Hungary, India, Italy, Japan, Republic of Kazakhstan, Republic of Korea, RSA, Russia, Slovakia, Sweden, and Switzerland. The participants explored the basic trends of the Fourth Industrial Revolution as 3D printers, robotization, Big Data technologies, artificial intelligence, and the Internet of Things. 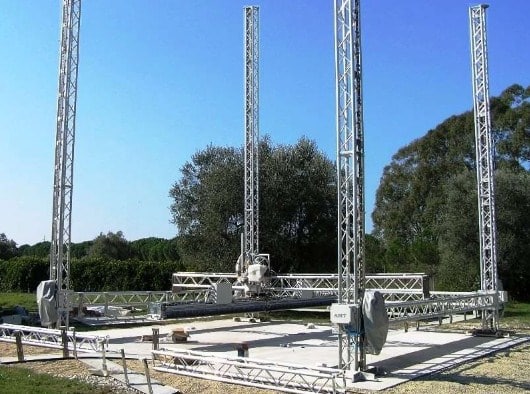 This year the main theme of INNOPROM was Digital Manufacturing. A dramatic increase in the share of professional visitors was noticed in spite of introducing paid admission in 2018. A total of 46,000 visitors attended the exhibition.

Among the exhibitors was AMT-SPETSAVIA Group of Companies from Russia which introduced a new series of construction 3d printers (COP-printers, Construction Objects printing) AMT S-500 – the largest construction printer in the world, the release of which is mastered this season. It has a working surface of 11.5 x 11.0 x 15.0 m, which makes it possible to build buildings up to 5-6 floors. It is also possible to increase the working field of AMT S-500 to 31.0 x 11.0 x 80.0 m. The other construction printer AMT S-300 with a working field of 11.5 x 11.0 x 5.4 m allows you to erect a two-storey building with height up to 120 sq.m. directly on the foundation.

The S-500 printer is equipped with a new generation print head for fast printing and it prints structural concrete based on 400-500 series cement with a fraction of non-metallic materials up to 6 mm. In addition to this the design of the printer also allows you to carry out facade work. Support beams are equipped with platforms. The platforms are equipped with 220V 6A sockets. The maximum tool load on the facade is 1000N.

For new models of 3d printers, a station for preparation and supply of concrete has been developed. It is matched with the print head for better productivity and extrusion speed. The feed station of the mixture is included in the basic equipment, along with a high pressure washer to service the equipment. Also included in the package is a control computer with pre-installed licensed software.

According to company’s press release from June, the first customer of the new model S-500 printer was an Indian developer company planning to use this Russian equipment to build a 10-storey residential neighborhoods in the southern and eastern states of India. For this the engineers of AMT-SPETSAVIA took into account the requirements of the developer and adapted the printer for local climatic conditions. A team of Russian engineers will fly to India to start up the equipment and train the staff for the construction work.

More Recommended Reads for you: