Hudson Yards is the largest private real estate development in the history of the United States and the largest development in New York City since Rockefeller Center. The site will include more than 18 million square feet of commercial and residential space, state-of-the-art office towers, more than 100 shops including New York’s first Neiman Marcus, and a collection of restaurants curated by Chef Thomas Keller. The urban development will include approximately 4,000 residences, The Shed, a new center for artistic invention, 14 acres of public open space, a 750-seat public school and an Equinox Hotel with more than 200 rooms—all offering unparalleled amenities for residents, employees and guests. The development of Hudson Yards will create more than 23,000 construction jobs.

Hudson Yards is the fulfillment of a remarkable collaboration that includes a talented group of visionaries – planners, architects, engineers, designers, public servants, fashion icons, renowned chefs, business leaders, luminaries and more. They are working in partnership with New York’s development and transportation authorities, and with some of the world’s most iconic retail brands and leading companies – each of whom will call Hudson Yards home. 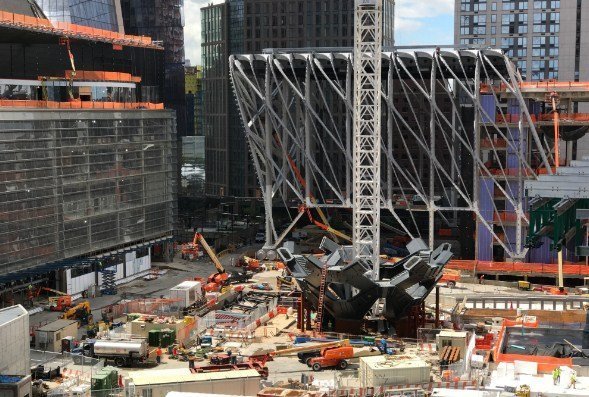 Strategically located between 10th and 12th avenues from West 30th to West 34th Street, Hudson Yards is the center of the metropolitan region with unsurpassed connections to commuter rail service, the subway system, the West Side Highway, the Lincoln Tunnel and ferries along the Hudson River. The extension of the No. 7 Subway line, opened in 2015, arrives at Hudson Yards’ front door. In the nexus of Chelsea and Midtown West, this dynamic neighborhood is next to chic art galleries, award winning restaurants, popular bars and nightlife venues, and highly respected international fashion and design.

The neighborhoods surrounding Hudson Yards, including Chelsea, West Chelsea and Hell’s Kitchen are buzzing with chic art galleries, innovative restaurants and bars, and highly respected international fashion and design. City dwellers hungry for a taste of the outdoors now have a variety of green spaces to explore including the much-celebrated High Line, Hudson River Park and Hudson Park & Boulevard. With the new No. 7 Subway extension open as of fall 2015, getting to Hudson Yards will be fast and easy.

In order to transform one of Manhattan’s last undeveloped areas, the city and state have initiated major investments in mass transit, new parks and cultural and recreational facilities directly adjacent to Hudson Yards. The following public investments have already catalyzed rapid development in the surrounding area and their impact will be especially beneficial for Hudson Yards, situated at the epicenter.

A central part of the Hudson Yards rezoning and development program extended the No. 7 Subway west and south from its old terminus at Times Square adding a new station at West 34th Street and 11th Avenue.

The renovation of Moynihan Station and construction of a new train station at what is now known as the Farley Post Office will extend Penn Station west to 9th Avenue. The goal of the project is to alleviate pedestrian congestion at Penn Station by allowing passengers to access Amtrak, New Jersey Transit and Long Island Railroad trains across from the existing MSG/Penn Station complex.

The Javits Center has recently completed a renovation into a state-of-the-art complex that will attract more visitors to New York City and further reinvigorate the west side of Manhattan. Major renovations to the main building include a new green roof, curtain wall, skylights, and the enlargement of the main entrances and upgrades to the building’s systems.

On September 20, 2012, the High Line broke ground on its third and final section, which wraps around Hudson Yards, extending the park to the northern terminus of 12th Avenue and West 34th Street. Work was finished in 2014.

Hudson River Park begins at Clinton Cove at West 55th Street and the West Side Highway and extends five miles to Riverside South. With thirteen reconstructed piers and dozens of landscaped acres offering both a tranquil respite and a multitude of active recreation, it’s difficult to imagine the New West Side without this amazing park.

Hudson Park & Boulevard is a central element of the new Hudson Yards business district. Four acres of broad tree-lined parks and open space will extend from West 33rd to West 39th Street and eventually all the way to West 42nd Street. The first phase was completed in 2015. The new No. 7 Subway station has two entrances to the park. 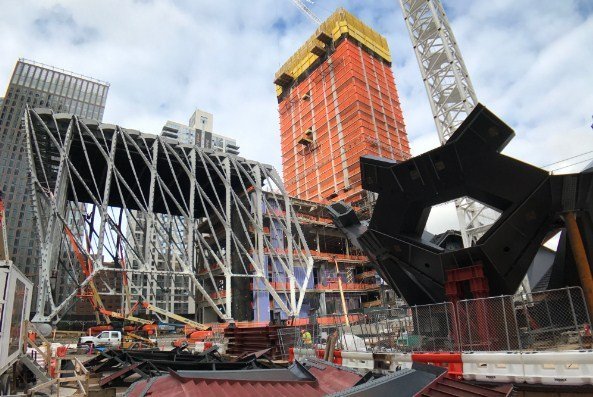 The first complete tower on the site is 10 Hudson Yards, which opened in May 2016. It is fully leased to companies that include Coach Inc., L’Oréal USA, SAP, Intersection, Sidewalk Labs, VaynerMedia and Boston Consulting Group including BCG Digital. 10 Hudson Yards ascends 895 feet with 1.8 million square feet of commercial space.

Another prominent skyscraper under construction is 30 Hudson Yards, with 2.6 million square feet. At 1,296 feet high, it will be completed in 2019 as the second tallest office building in New York. 30 Hudson Yards will be home to leading media, business and financial companies including HBO, CNN, Turner Broadcasting, Time Warner, Inc., KKR & Co. and Wells Fargo Securities.

55 Hudson Yards is the third commercial tower. At 780 feet and 1.3 million square feet, it will be home to MarketAxess, Milbank and Boies, Schiller & Flexner, LLP. The office towers are part of the overall master plan that includes 4,000 residences, a new hotel and a dynamic retail space that will feature more than 100 luxury and specialty shops, include Manhattan’s first ever Neiman Marcus store. The retail component will include a collection of restaurants, and overlook the enthralling Public Square and Gardens. These components will open to the public in 2019.